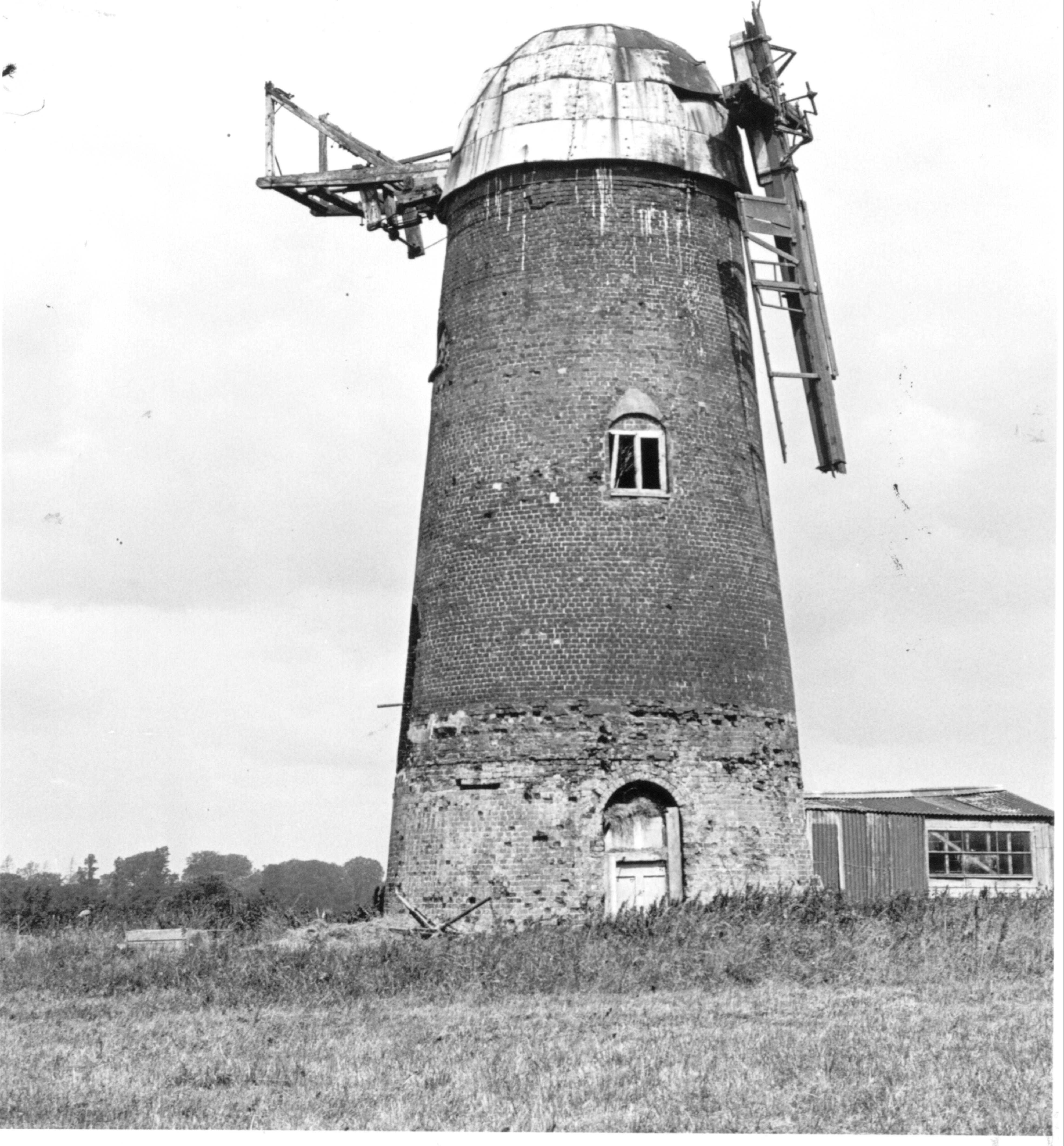 Wilton Windmill in disrepair in August 1935

Wilton Windmill was built in 1821 after the new Kennet and Avon canal had been built. This canal was built over and through the site of some local watermills and the pumps providing the water for the canal also lowered the river levels so that the remaining watermills were no longer viable.

The mill was in operation for 100 years, however with the introduction of new steam roller mills and fast production of cheap bread it became unwanted, was abandoned and then fell into disrepair.  The mill was finally restored to its former glory in 1976, by a team of dedicated volunteers. 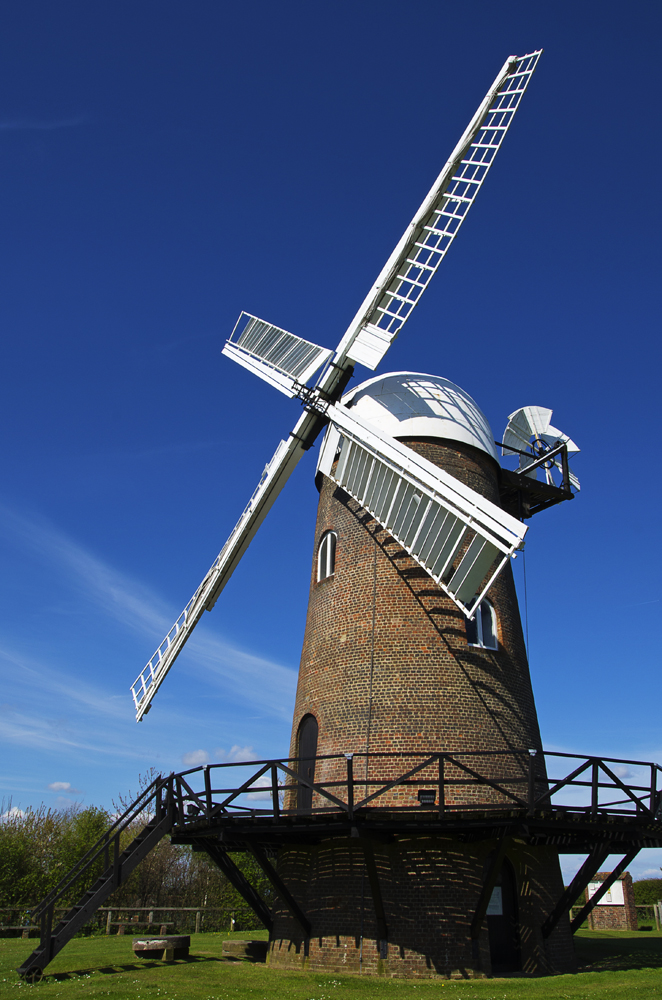 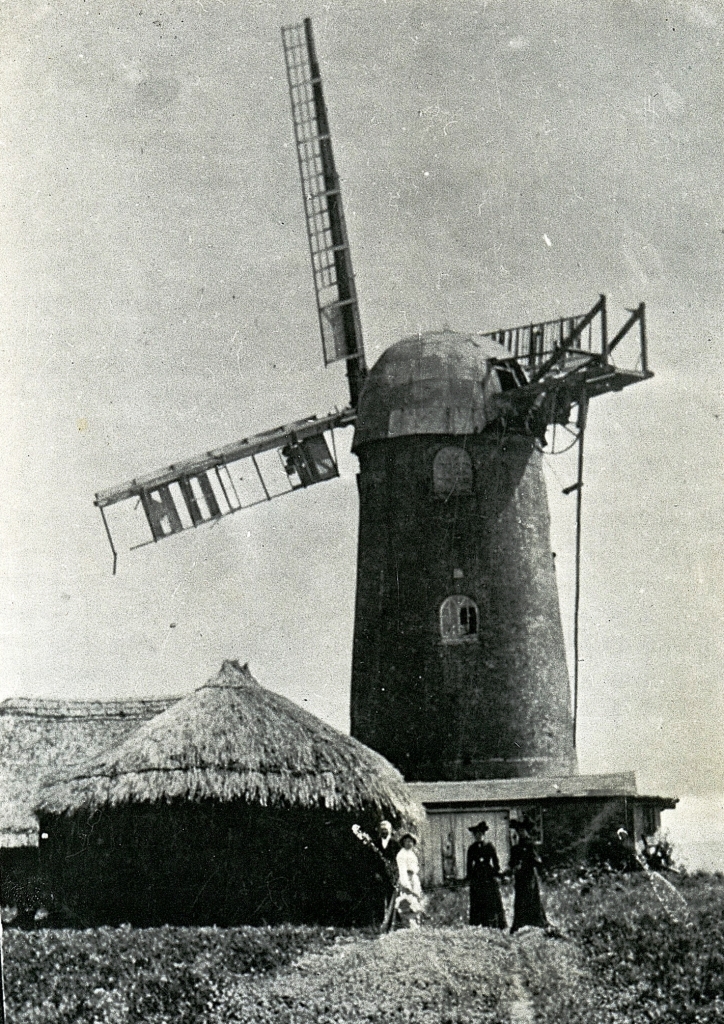 Wilton Windmill in about 1900

Today it is managed and operated by the Wilton Windmill Society which uses the mill and provides guided tours, whilst the mill is still owned by Wiltshire Council.

The mill was built as a traditional tower mill with a fantail which turns the cap, to ensure that the sails always point into the wind.

The mill has four sails in total; two patent (these are the slatted sails which can be quickly activated) and two common canvas sails, which have to be set before the mill starts to turn. 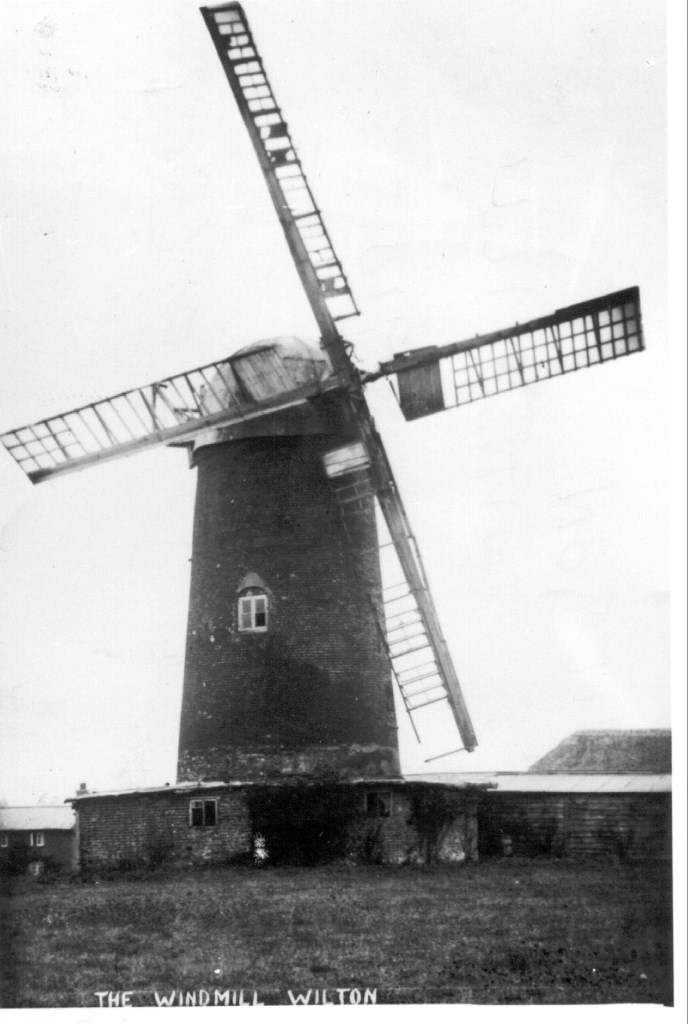 Wilton Windmill in 1910 with roundhouse

From Ruined to Restored - How it happened

Peter Lemon BEM - President of The Wilton Windmill Society - has been involved with the windmill for all his life - his first memories being of the chickens that lived there when it was derelict.  Here he shares his deep knowledge and personal experience of the Windmill's restoration:

I have been associated with Wilton Windmill all my life, as my parents David and Kay Lemon lived in Windmill Cottage next door to the Windmill when they were married in 1940 until we moved into Wilton village in 1948. My father was the prime motivator to get Alistair Buchanan to sell the Windmill to Wiltshire County Council in 1970. He managed to persuade them of the importance of restoring the Mill as a working Windmill so that she would be looked after and kept in working condition rather than being left to her own devices and damaged by the weather.

There were a lot of discussions as to how the Windmill should be restored. Wiltshire Historic Building Trust took on the responsibility and together with English Heritage made the decisions as to who restored the Mill and how it was to be carried out. They understandably decided that she must be restored in exactly the same design as she was built in 1821, although there was a number of glaring design faults which were rectified in other Mills built later through Queen Victoria’s reign.

In the early 1970's Rex Wailes was a recognised authority on Windmills in the UK and he was asked his opinion about the length of the fan tail staging which positioned the fan tail a long way from the Cap. This position is unique to Wilton Windmill as most fantails are positioned very close the cap. He told English Heritage that with the increased over hanging weight of the fantail, a major repair would be required within 20 years to rectify the stress on the timber structure in the Cap.

As predicted this work was required in 1996 and cost as much as the entire renovation work had cost 20 years’ earlier. Having rectified the movement in the oak beams they were supported by steel beams to ensure the base of the cap remained square and was easily rotated by the fan tail when the wind direction changed.

Wilton Windmill is the only working Windmill in the South and West of England and by 2013 had been continuously producing whole grain flour for the previous 37 years. The continued success of the Windmill has very largely due to:

• The continued help, interest and maintenance provided by Wiltshire Council;

• The active volunteers who make up The Wilton Windmill Society;

• David Nicholls who took over the restoration project in 1974 when Derek Ogden went to America;

• Paul Sellwood of Owlsworth IJP who continues to maintain the Windmill for us all.

David Nicholls tells us here about his experiences when restoring Wilton Windmill forty years ago, and once you have read it, you will begin to fully appreciate how much we all owe him for his amazing dedication and expertise. 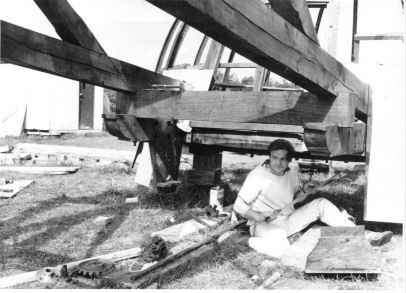 The Restoration - In Brief

Wiltshire Council purchased the mill in 1971, and leased the building to the Wiltshire Historic Building Trust so that they could restore the mill to its former glory. The initial restoration started in early 1972, with the removal of the cap, fantail and related components. 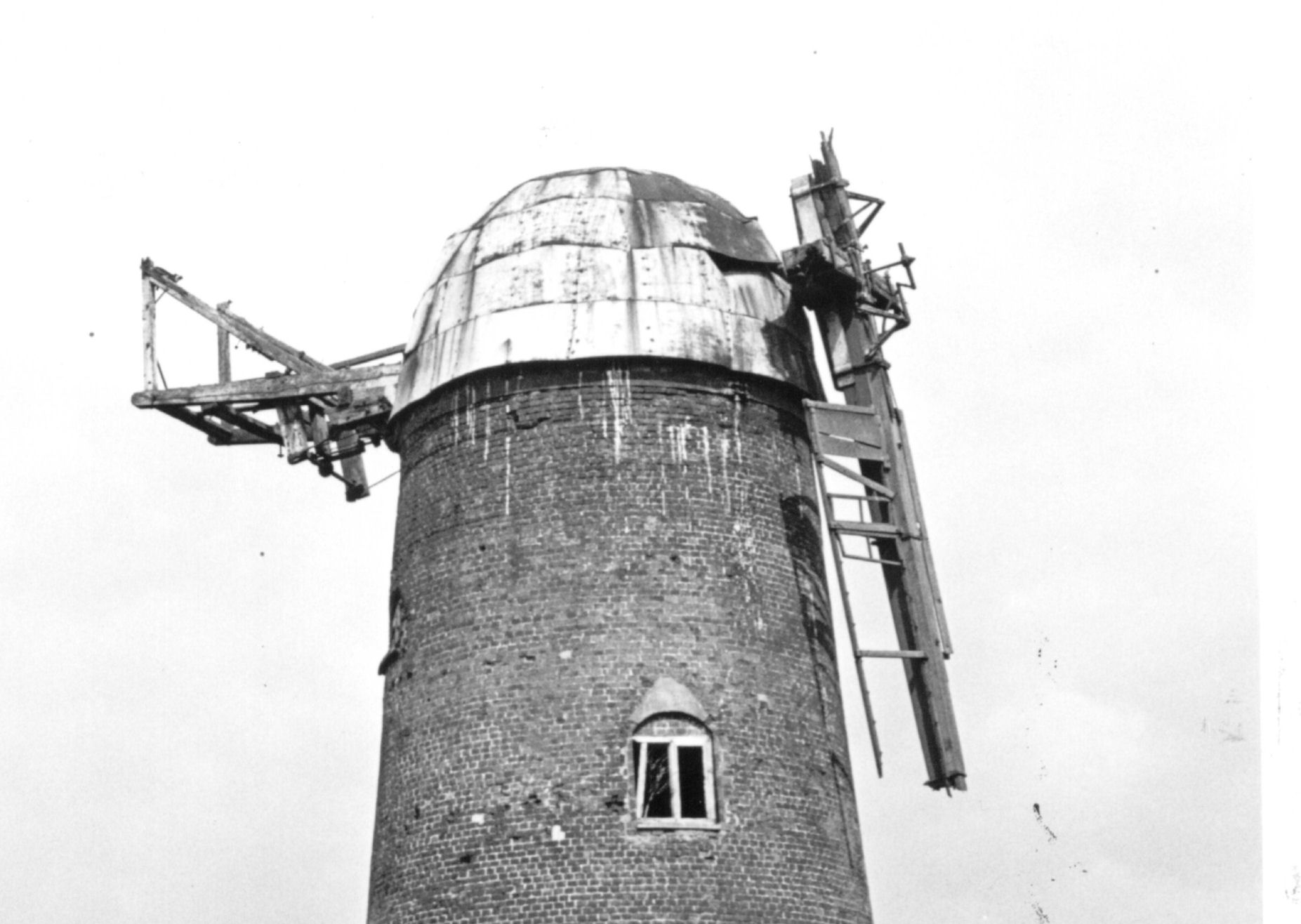 The removal of the Cap was a slow process as it was important not to cause any further damage to the metalwork or brickwork.  The cog ring was removed by crane. Each piece was labelled so that duplicates could be made.  A few of the metal items such as the wheel bearings and worm gear were used to create patterns, so that new ones can be made in the future.
All of the cap ribs were in perfect condition and required only a wire brush and a fresh coat of paint.  When the first repairs were undertaken in 1974 / 75, it was decided to replace the original wrought iron sheet covering the cap with 20g aluminium sheet. The original iron ribs were multi drilled to fit the sheets. It turned out to be a poor decision and when further major repairs were undertaken some years later, the cap was reverted back to wrought iron. Because this material had not been produced for 80-100 years, the old wrought iron was re-processed in Yorkshire to sheet form and profile rolled to fit the cap ribs. The mill cap has therefore been returned to its correct form and painted with four coats of lead paint. The sheets are fixed by riveting in the original holes. 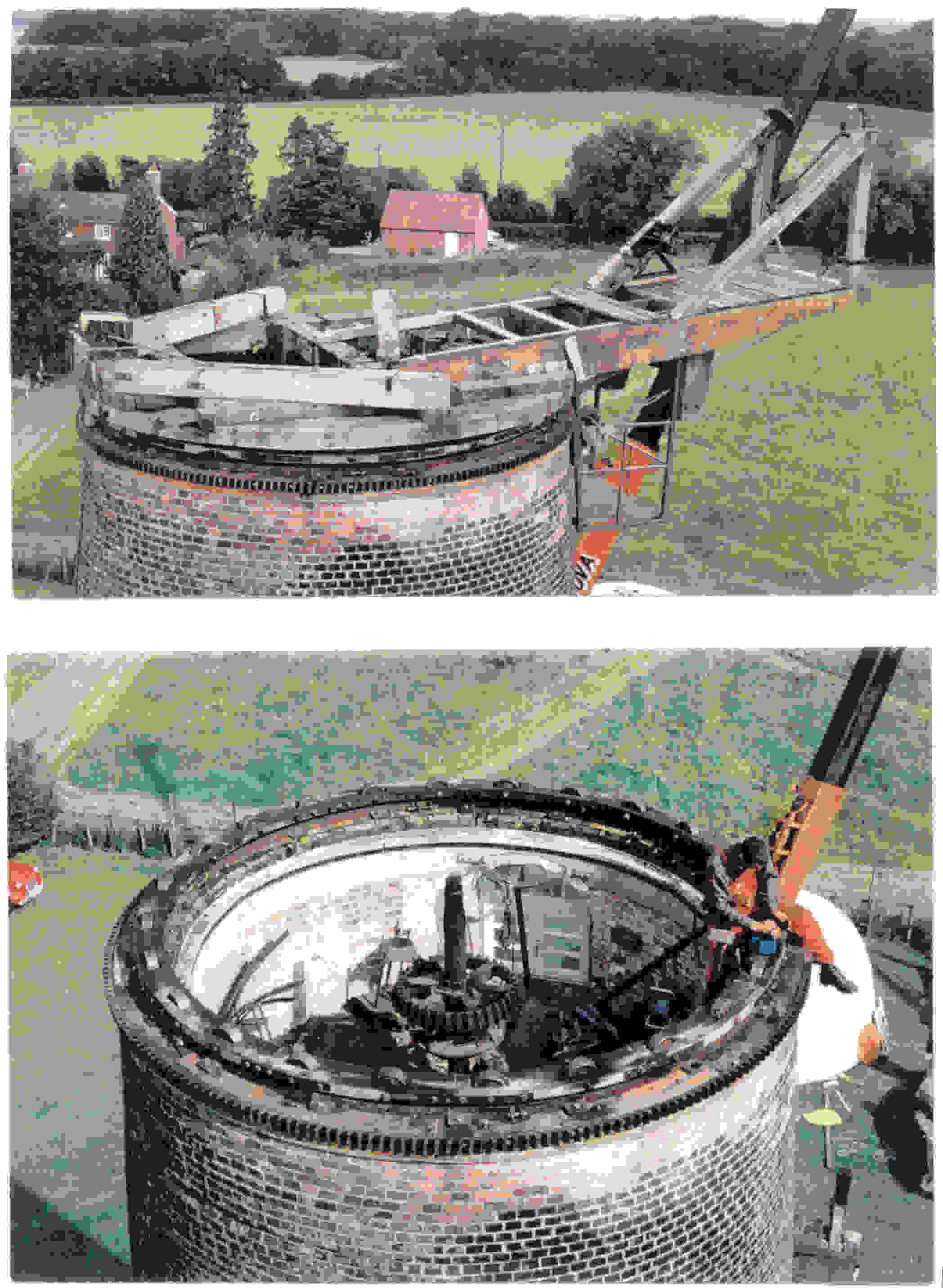 The final part of the restoration was the purchase of a new set of stones, still in use today.  The original stones can be seen around the base of the mill.  The old runner was used to create the door step for the main entrance.

The majority of the iron work was found to be in good condition, however almost all the wood had completely rotted.  In spite of this, the team was able to preserve the sack hoist and brake lever, both of which can be seen in the mill today.  English oak was used for the beams and elm for the mill flooring.  Structurally the mill was in fair shape, however the brickwork at the top of the mill required replacement with a set of common sails and a set of patents sails as the originals had completely disintegrated. 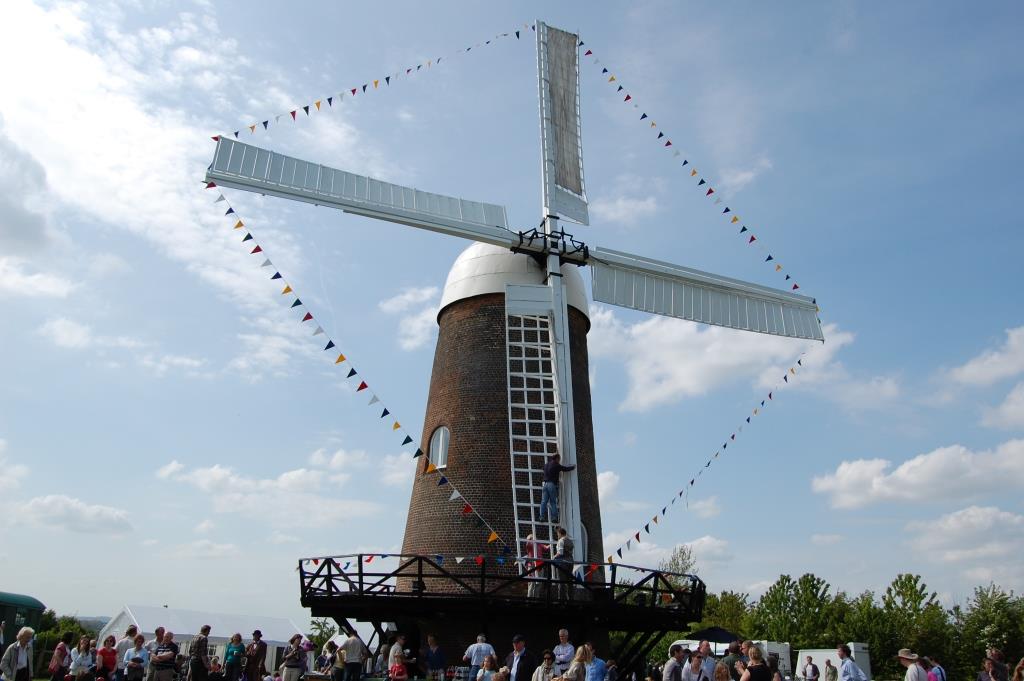 The mill was fully operational by 1976 by which time the restoration had cost the princely sum of £25,833.  Following the restoration, the Wilton Windmill Society was formed to take on responsibility for the running and management of the mill.  A team of millers regularly mills wheat, producing flour for sale in the mill Shepherd's Hut Shop as well as other local retail outlets.

The mill has been returned to its former glory and fulfils its role as a fully operational windmill, to be enjoyed for generations to come.

This website uses cookies to improve your experience while you navigate through the website. Out of these, the cookies that are categorized as necessary are stored on your browser as they are essential for the working of basic functionalities of the website. We also use third-party cookies that help us analyze and understand how you use this website. These cookies will be stored in your browser only with your consent. You also have the option to opt-out of these cookies. But opting out of some of these cookies may affect your browsing experience.
Necessary Always Enabled
Necessary cookies are absolutely essential for the website to function properly. This category only includes cookies that ensures basic functionalities and security features of the website. These cookies do not store any personal information.
Non-necessary
Any cookies that may not be particularly necessary for the website to function and is used specifically to collect user personal data via analytics, ads, other embedded contents are termed as non-necessary cookies. It is mandatory to procure user consent prior to running these cookies on your website.
SAVE & ACCEPT